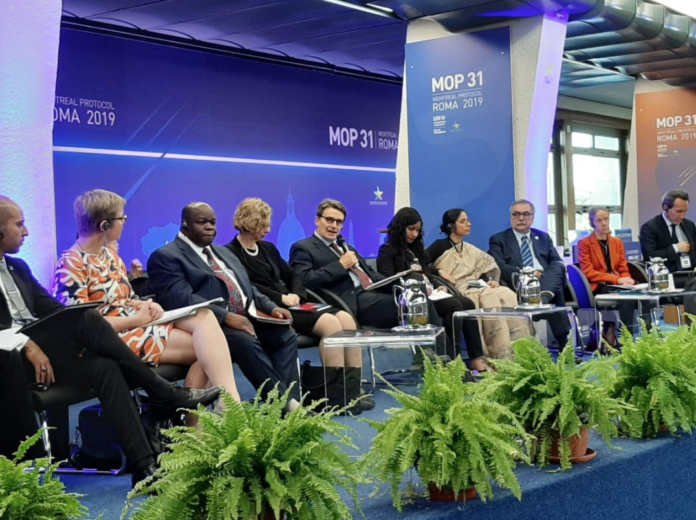 Among the participants, the undersecretary for the environment, Hon. Roberto Morassut; the Finnish Environment Minister, Krista Mikkonen, representing the EU; the Undersecretary for Environment of India, Geeta Menom; the Minister of Natural Resources, Energy and Mines of Malawi, Bintony Kutsaira; the Deputy Minister of Environment of the Maldives, Khadeeja Nassem; the Executive Director of UNEP, Inger Andersen; and the Director for food waste at the World Resources Institute, Liz Goodwin.

The outcome of the work was the “Rome Declaration on the contribution of the Montreal Protocol to a sustainable cold chain and to the reduction of food waste”, which was approved by the European Union in October following the positive conclusions by the Environment Council and signed on November 7thby Minister Costa for Italy as well as by 64 other countries. The declaration will remain open for signature for about a year, or until MoP32 in 2020.

“The goals of the 2030 Agenda that the Montreal Protocol has achieved so far – as Morassut stated while opening the round table – prove the effectiveness of adopting an integrated and synergistic approach at the global level to fight climate change, a commitment that is closely linked to the fight against waste of food (in turns implied by goal 12 of Agenda 2030)”.

“By means of an ethical approach that considers the levels of development and standards of each country – continues Morassut – the Montreal Protocol offers an important insight in the management of refrigerants, for a sustainable cold chain that reduces food waste while protecting the environment and pursuing the objective of industrial and infrastructural innovation. In the Budget Law, we introduced strong tax incentives for companies that want to invest in the Industry 4.0 domain, or in innovation for sustainable development. Such companies have proven more competitive and capable of creating jobs”.

Undersecretary Morassut stressed how “today, with the Rome Declaration, the Kigali Amendment and its contribution to the Paris Agreement, we have the opportunity to take on a new challenge and adopt technological solutions to reduce the impact on ozone” and concluded the work by reiterating Italy’s complete and strong commitment to collaborate with the international community in identifying the resources to ensure the transition to an increasingly sustainable world.