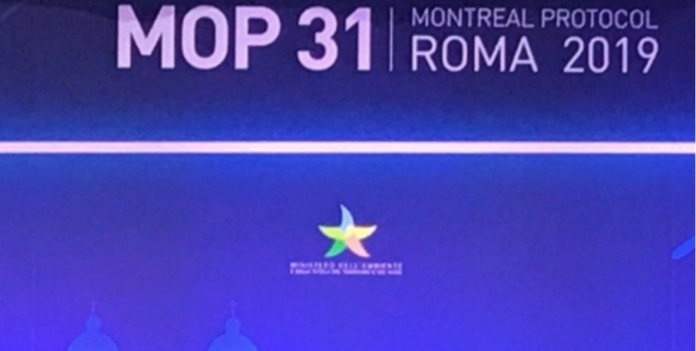 The work of the 31st Meeting of the Parties (MOP31) of the Montreal Protocol on the protection of the stratospheric ozone layer, came to an end last week.

It was hosted in Rome, with the collaboration of FAO, and involved the delegations of 198 countries.

The conclusion of the High Level Segment is especially noteworthy as all the 198 member countries agreed that the delegations are to implement the necessary decisions to realise globally what was foreseen by the first international agreement for the protection of the environment.

The event is the first meeting of the highest decision-making body of the Treaty since the introduction world-wide of the Kigali Amendment for the reduction of hydrofluorocarbons (HFC), which enables the Montreal Protocol to ensure full alignment of the policies for the protection of the ozone layer.  The effects are starting to be visible in terms of progressive reduction of the well-knows “hole”, and of policies for the fight against climate change. The Kigali amendment, which prescribes an additional 0.4 degrees Celsius reduction of global warming, is one of the most important contributions to reach the goals of the Paris Agreement on climate.

The MOP31 of Rome is a success for the Italian government, as it broke every record of participation in the history of the Protocol, with as many as 498 government delegates from the countries supporting the Treaty and a total of 825 accredited participants – including representatives of the United Nations, the scientific community, non-governmental organizations and the private sector.

Furthermore, nearly 70 countries joined the initiative by the Italian government to present a Rome Declaration on the contribution of the Montreal Protocol to the development of a sustainable cold chain to counter food waste. With the Declaration, the Parties reach a consensus on a political plan following the basic activities of the Treaty, for the first time since the Bali MOP of 2009. By acknowledging the role of the Protocol in ensuring a contribution to the fight against food waste through the transition of the “cold chain” – i.e. collection, storage, transport and retail sale of food, towards the use of sustainable refrigerant gases, the Declaration contributes to the actions of FAO and governments, international institutions and other interested parties of the scientific community, civil society and industry to achieve the Sustainable Development Goals agreed in the 2030 Agenda, including the fight against hunger, the development of sustainable production and consumption systems, and the fight against climate change.