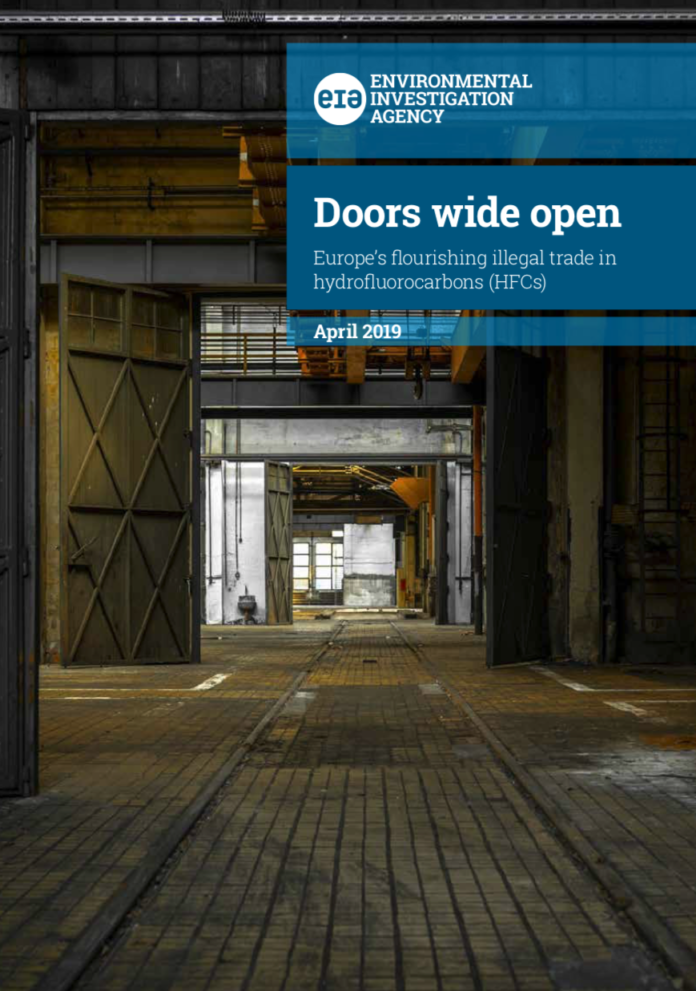 In April 2019, the environmentalist NGO EIA – EnvironmentalInvestigation Agency – published a report entitled “Doors Wide Open” that, in its kind, was a premiere. In it, they presented the results of a long investigative work aimed at outlining the face of the illegal traffic of refrigerants on the European Union’s market

Since April 2016, in fact, reports of possible illegal movements of refrigerant on the Community market have started piling up, market that just at that time was about to enter a critical phase of the refrigerant provisioning, owing to the phase down plan imposed by the F-Gas Regulation.

According to what we can read in the introduction of EIA report, in 2016 the producer of HFC

Honeywell stated that as many as 10 million tons of HFC CO2 equivalent were imported illegally, a quantity amounting to 5% of the shares permitted on the EU market by the F-Gas Regulation. Since then, such reports have increased in both quantity and seriousness, up to reaching a peak in 2018.

At the end of 2018, EIA carried out two surveys, the first addressing member States’ authorities to determine the state-of-the-art of their efforts to conform to the regulation about fluorinated gases and the second intended for the main interested sector stakeholders to obtain data and opinions on the illegal trade.

The result of these investigations highlights not only that at that epoch – i.e. almost four years after the coming into force of the F-Gas Regulation – there was a relatively thriving shameless illegal trade but also that member States were reacting to it too slowly.

To support the statements by the main sector stakeholders according to which big quantities of illegal HFC refrigerants were entering the EU market, EIA has also analysed customs and HFC register data. According to what EIA affirms in the report at stake, in 2018 on the EU market there were presumably about 16.3 MtCO2eq more compared to what was expected to be available through shares, i.e. about 101.2 MtCO2eq. This is likely to be the quantity of illegal HFC on the Community market at the end of 2018/beginning 2019. 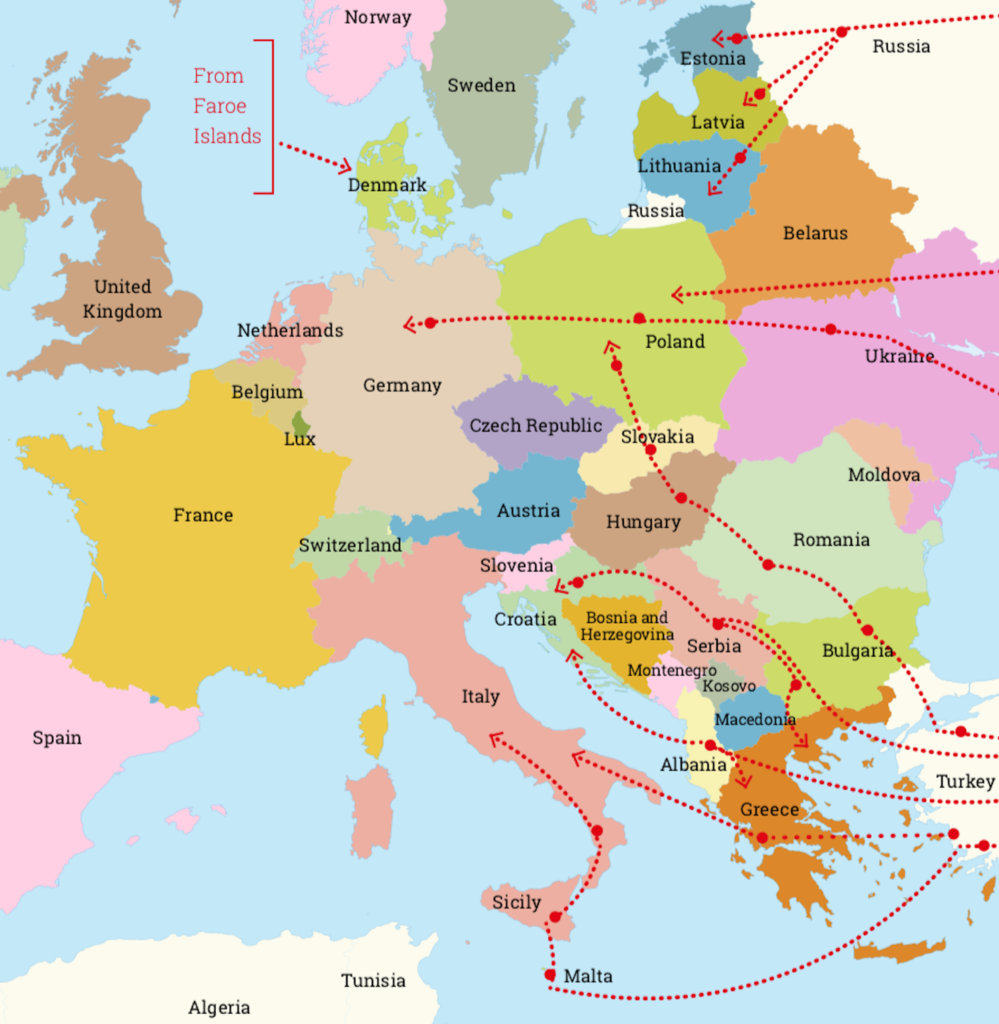 Strictly speaking, we must say that from the end of 2019 to the beginning of 2020, the customs and the Finance Guard Corps of many member States made many seizures. At the beginning of 2020, also in Italy they carried out some operations resulting in the seizure of illegal refrigerants amounting to over 26,000 CO2 equivalent tons.

Something is changing, then. The problem of illegal refrigerants is constantly submitted to entrusted authorities’ attention, but the road to be travelled seems to be still very long: if we read EIA report, we assess that many recommendations contained in it have not been currently implemented, yet (May 2020). Dialoguing with Fionnuala Walravens, Senior Climate Campaigner of EIA.

One year and a half has gone by since when EIA published its report “Doors Wide Open”. Has something changed in this lapse of time?
I think that Doors Wide Open has shared in raising the alarm about the climatic crime connected with HFC. As response to the concerns regarding the illegal trade of HFC, the European Commission and member States have taken some provisions to strengthen the compliance with the Regulation. And quite successfully: in the second half of 2019, for instance, were reported 11 seizures of about 54 tons of HFC, a ten-time increase compared to the same 2018-period. This indicates a rise of customs’ efforts. However, a serious lack of consequences in terms of transgressor punishment still remains as well as of a correct application of sanctions that would discourage the future illegal trade.

Is the vast majority of the illegal trade caused by smuggling outside the share system?
At present, it is difficult to have conclusive proofs of that. However, the proliferation of holders of fluorinated gas shares suggests there is a higher profitability connected with the release of HFC on the market, despite strongly reduced shares. In June 2019, over 2000 companies reported about their activity with fluorinated gases. EIA’s survey suggests that, owing to the high number of holders of fluorinated gas shares, it is likely newcomers have received permissions for around 5,000 tons CO2eq. This is equivalent to about 3.8 tons of R134a or 2.4 tons of R410A. It is not clear how much it would be easy to manage a legal business with so low assignments. We suspect, instead, the proliferation of holders of fluorinated gas shares indicates that some shareholders are abusing share allocation systems and releasing on the market HFC that exceed their shares. We have statistical and anecdotal proofs the illegal trade of HFC is taking place and it is carried out in various manners – from the wrong declaration to smuggling and other methods – and, therefore, we must create a regulatory response that faces all courses. The Commission should take care of limiting all illegal HFC exchanges, in addition to smuggling.

Where do you think the main weak points of the HFC share system reside?
The current system of shares is based on the annual self-declaration by shareholders. It is not a system in real time. Any comparison between the limits of HFC shares and the real HFC imports, for instance, can be carried out only various months after one civil year has gone by since companies’ self-declaration – in other words, much time after the occurred HFC import. Moreover, it is not possible to limit the HFC imports officially intended for the export in a successive time. These deficiencies and others prevent customs authorities from making HFC share limits respected, thus contributing in the illegal trade. Besides, we guess not all customs spots have access to the register of fluorinated gases, which means that some customs officials would be potentially unable to identify whether somebody is a shareholder. If I am not wrong, the single window system is expected to be available by 2020/2021. Do you think it will be a step forward?We have understood this will be implemented in 2020 experimentally, in a limited number of member States. Although this is a promising step, it is not clear how it will occur the conversion from share permissions, which are measured in tons of CO2 eq., to the metric tons measured instead at customs points. In your study “Doors Wide Open” you make some recommendations. A higher transparency of the HFC register, for instance…Despite various demands for information freedom by EIA, updated information about the companies that hold the shares of fluorinated gases are not available to the public. This makes difficult for the civil society and companies to know if the company from which they buy is a registered shareholder. In our study “Doors Wide Open” you refer to a shipment licence system, too …
The current electronic HFC register does not include a system of HFC licences, it is simply an obligation of post hoc reporting. An efficient system of shipment licences should include HFC in transit and other uses free from the gradual reduction system, with any import or export of HFC updated in the HFC register in real time. This would prevent a shareholder from exceeding its quantity. Would you like to add something?The HFC smuggling is a climatic crime. It mines environmental policies and leads to an increase of greenhouse gas emissions. Even if we have ascertained some positive efforts by some member States to identify illegal HFC, this work risks of being weakened by insufficient sanctions. Whenever information about sanctions have been made public, we have often seen the application of fines that represent a ridiculous fraction of the potential profits that seized HFC can grant. The constant absence of the application of severe penalties goes on boosting the illegal trade. Moreover, in terms of regulatory projects to prevent the illegal trade, the regulation of fluorinated gases is seriously inadequate. Member States and customs authorities are heavily disadvantaged because the necessary instruments to face the illegal trade have been omitted by the regulation on fluorinated gases. This includes a system of HFC licences that would allow member States and customs authorities the monitoring in real time of shipments, imports and exports in relation to the allocation of shares. Besides, because of loopholes, like the definition of non-rechargeable containers, the threshold of 100 tCO2eq and a system of HFC share allocation badly conceived and missing transparency, many small-size illegal traders have appeared, further worsening the efforts of member States and of customs authorities.

Then, finally: are doors still wide open?
We have assessed an improvement in some areas of Europe but since then little has changed in the regulation modalities of HFC trade and sanctions are still too lax. The issue of the HFC trade will grow on a global scale hand in hand with non-EU Countries’ gradual reduction of HFC. EIA has understood that the single window will be used to rule HFC exchanges in some member States. If this is certainly a step towards the right direction, European leaders should seize the opportunities offered by the next review of fluorinated gas Regulation and develop a world-class system of HFC licences in real time for shipments.