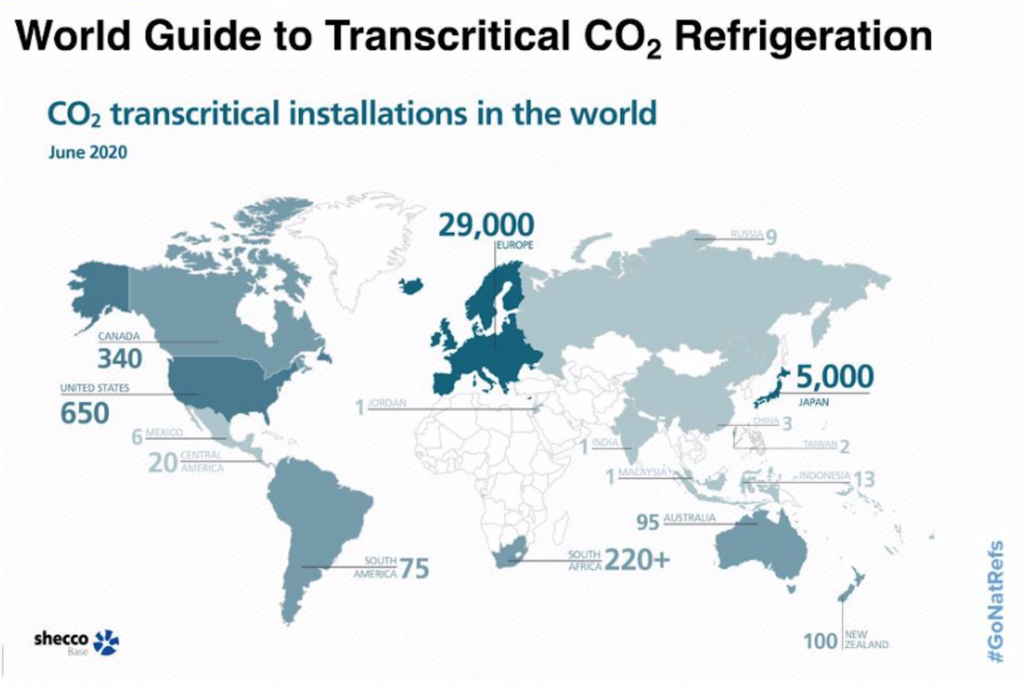 The European Commission is going to revise the F-Gas 517/2014 Regulation to analyse the results obtained until now and eventually to modify it, if they are not compliant with what expected. This review, contemplated by the Regulation itself, does not exclude the possibility there are further restrictions in the use of HFC, and for this reason it is advisable to choose technology and refrigerant options as safe as possible from the regulatory point of view

Few refrigerants are really spared by any modification to the Regulation and, among them, we certainly find natural refrigerants. Mainly, due to their minimal specifications of direct impact on the environment – almost null ODP and GWP – but also because, as natural molecules, once reached the environment they do not cause unexpected or undesired consequences, thing not taken for granted for synthetic refrigerants, as history teaches.

The advance of CO2

More and more entrepreneurs in the world choose natural refrigerants and this is particularly evident if we analyse the developments of transcritical CO2 in the last 10-12 years. As highlighted in the recent “World Guide to Transcritical CO2 Refrigeration”, the first wide report on the transcritical technology use on a world scale, presented in June 2020 by Shecco, today transcritical installations in the world are estimated to be over 35,500. In 2008, when Shecco conducted the first census of transcritical plants, they counted only about 140 installations, all in Europe. From 140 to over 35,000 in the lapse of 12 years means that those who trusted this technology were not disappointed and it has kept its promises of sustainability, efficiency and user-friendly management.

Retail is the primary application field. In Europe, especially supermarkets with sale surface exceeding 400m2 install transcritical CO2 plants. On the contrary, as indicated in the Guide, until now in Japan small convenience stores have driven the success of the transcritical CO2. However, this situation is changing due to a legislation modification that makes their use interesting also for the supermarkets with bigger surface.

In Canada transcritical CO2 is demonstrating its suitability for calculation centres and winter sports arenas, too.

An investigation carried out by Shecco and presented in the guide indicates that those who approach CO2 essentially turn to it due to its environmental characteristics that make it free from any eventual legislative restriction. However, today the users of this refrigerant confirm plants’ energy efficiency, too, and the low costs along the lifecycle, deeming it a more than valid option to both HFC and HFO.

The history of CO2 refrigerant, starting from its “rediscovery” in the Early Nineties, mainly by Gustav Lorentzen, is a smart example of how research and development can, in a relatively short time, lead to the improvement of a technology, to the extent of making it compete with much more consolidated technologies. When, at the beginning of this millennium, transcritical plants were debated, they were relegated to North Europe and they indicated an equator of CO2 under which transcritical plants were not efficient. At present, just ten years later, not only a geographical CO2 equator does not exist any longer – and installations in Jordan or South East Asia demonstrate it- but technology is neither relegated to retail any longer, as industrial solutions prove, for heat pump and HVAC at disposal today.

The development of CO2 is certainly the most impressive among all natural refrigerants because such a parable in such a short time cannot be narrated for any of them. Nevertheless, a constant expansion of application fields and number of installations occurred for the other natural refrigerants, too.

Ammonia is the refrigerant with the longest history. The first applications date back to over 150 years ago. Its efficiency, especially in big plants, has always made it the ideal refrigerant for industrial applications. Owing to its toxicity and light flammability, anyway, it is necessary to turn to particular solutions in the implementation of plants (a dedicated machine room, not accessible to unauthorized people, leak detectors, etc.) and to conform to safety regulations. In recent years, the research has focused on the charge decrease to rise applications’ safety and to enlarge the use field of this refrigerant. Nowadays, the discussion about the definition of low-charge plant is still open and the various sector players do not agree about what is the limit to define a low charge. In the opinion of an important manufacturer of ammonia plants, “low charge refers to the charge ratio per cooling capacity unit and indicates systems under 1.3 kg/kW, with some systems up to 0.06 kg/kW”.  Beyond definitions, nowadays there are modern solutions of low-charge ammonia refrigeration that are arousing interest in a heterogenous number of cooling sectors. The environmental benefits of this refrigerant, combined with the proven safety credentials of low-charge ammonia systems and the ultra-efficient well-documented capacities, are widening ammonia applications, also in sectors where it has been almost a taboo until now, such as supermarkets and conditioning.

Currently, some available solutions allow reducing the charge by even 75% versus traditional plants, without affecting efficiency. Among the available solutions, the “World Guide to Low Charge Ammonia” published at the end of 2019 by Shecco, mentions three:

One of the reasons that limit the reduction is the possible system instability in case of refrigerant loss. Concerning the diffusion of systems that can be deemed low-charge, the Guide underlines that today (status: 2019), in the world there are at least 4000 plants in this category, most of which in Europe. The study establishes that the charge reduction is certainly a solution to mitigate the concerns about safety and to conform to the limits imposed by regulations. For this reason, it is an absolutely preferential way to affirm further the ammonia use. An investigation carried out in the Guide context indicates United States and Europe as the zones where such technology will successfully spread in the next future.

According to what stated by Ilana Koegelenberg at the Virtual Event of Shecco held online in September 2020, the world of hydrocarbon refrigerants is in great evolution. This evolution mainly concerns the commercial refrigeration world, where the shift to refrigerants with low GWP will imply a growing use of flammable refrigerants such as propane (R290) and isobutane (R600a). Therefore, the modification of charge limits, established in the IEC 60335-2-89 safety standards for self-contained appliances of commercial refrigeration, from 150 grams to 500 for A3-class refrigerants like hydrocarbons has been welcomed as good news by the manufacturers of propane-based, and other hydrocarbons, machines. Naturally, there are still some limits to the use of A3 refrigerants because the standard covers some applications but not others and anyway the limit depends on the volume of the room where the unit is used. Moreover, the new limits will come into force in the various Countries in different times because it is necessary to transpose them into the relative national legislations. In spite of that, this step indicates the awareness of the need of having to deal with flammable refrigerants in the future, owing to regulations on fluorinated gases. From the technology point of view, propane solutions proposed are many: from water loops – over 2500 installations in the world are estimated – to self-contained display units. And propane gradually makes its way in retail.

The conditioning sector must cope with flammable refrigerants, too, because the two refrigerants presently most used in the world in this sector– R22 and R410A – will be limited or eliminated. In Europe, the market is going towards R290 portable systems, supported by the F-Gas regulation that since 2020 has banned the use of refrigerants with GWP over 150 in these appliances. In the opinion of Koegelenberg, in Europe there are at least 8 producers of hydrocarbon portable devices and the estimated number of these appliances in the European market exceeds 200,000. By two years, all new portable appliances sold on the European market should operate with R290. The split world as well is approaching hydrocarbons. Concerning this, lively debate has aroused the sustainability acknowledgement given to a domestic split model by the company Midea when in 2018 it received the eco-sustainable “Blauer Engel” label, in Germany index of high environmental sustainability of a product. A première, for an appliance of this kind. It is certain that today technology offers a series of solutions that were unconceivable shortly ago. At the Cooling Global Prize, started by the Rocky Mountain Institute, among the eight finalist proposals for a new model of ultra-efficient sustainable conditioning system, as many as 5 are based on propane refrigerant. Chosen not only for its characteristics that make it highly sustainable, but also for its thermo-physical specifications that provide high efficiency even with low charge, today propane is generally indicated as an excellent replacement for both R22 and for R410A.