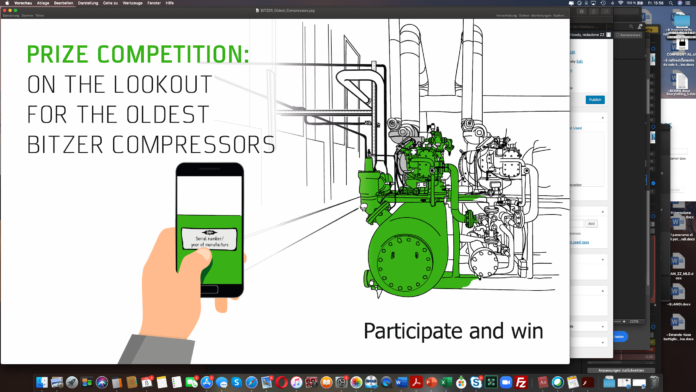 Who has the oldest BITZER reciprocating or screw compressor which is still in operation? BITZER is launching a competition to find it out and will be on the lookout for the oldest compressors until 15 March 2021. Participants have the chance to win great prizes.

Ever since the company was established over 85 years ago, BITZER has been a pioneer in the refrigeration and air conditioning industry in terms of quality and durability. The specialist in refrigeration and air conditioning technology has now launched a social media campaign to find the oldest reciprocating and screw compressors from BITZER which are still in operation. Participants who find the oldest compressors can win great prizes in both categories of compressor technologies: Every prize includes a webinar of the winner’s choice from the SCHAUFLER Academy, a wireless Jabra headset and a BITZER office package.

Customers who have authentic BITZER reciprocating or screw compressors in operation should send the following photos and information to socialmedia@bitzer.de:

The full terms and conditions of participation are available in the BITZER COMPACT magazine:
On the lookout for the oldest BITZER compressors – COMPACT (bitzer-compact.de)

How it all began

BITZER began making its mark on the industry in as early as the 1930s by manufacturing thermostatic expansion valves out of steel. It achieved its first international success with reciprocating compressors with a direct current voltage design which then demonstrated their performance in Argentina in the very same decade. In the 1940s, BITZER began paving the way for its success as a compressor manufacturer with its open two-cylinder reciprocating compressors and set additional milestones in the 1950s with hermetic and semi-hermetic compressors. When Senator h. c. Peter Schaufler took over management of BITZER in 1979, he steadily shifted the focus of the company towards the international stage and opened up new markets – in the early 1980s, BITZER then became the first manufacturer to market open and semi-hermetic screw compressors for commercial refrigeration and air conditioning applications which were being manufactured in serial production.