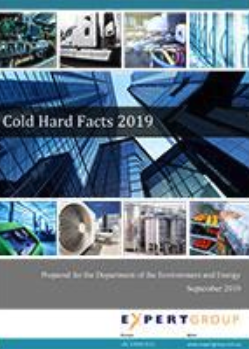 Cold Hard Facts 2019 brings together data from 2017 and 2018, that was not included in Cold Hard Facts 3, and analysis to identify key developments and emerging trends.

As it is written in the introduction of the work, the bank of high GWP refrigerants in Australia increased by 5% from 2016 to 2018, from around 50.800 tonnes in 2016 to an estimated 53.300 tonnes in 2018. Continued growth in the bank employed in stationary air conditioning, particularly in the smaller split systems and small commercial systems, contributed most to the overall growth of the bank. Analysis of equipment imports confirmed a rapid transition to the use of HFC-32 in small air conditioning systems. In 2018, HFC-32 systems made up 53% of all pre-charged small air conditioning units imported, an increase from 39% in 2016 and up from effectively zero in 2012.

Sales of small single split system air conditioners in 2018 have seen annual sales soften for the first time since the Cold Hard Facts series began in 2006. The split system market experienced solid annual growth rates of around five per cent from 2012 to 2018. In 2017 a record number of 1.258.000 single split systems were sold in Australia. Sales reduced noticeably in 2018 with total sales around 1.158.000; a year‑on‑year decline of nearly eight per cent. Sales of multi-head systems, and sales of medium air conditioning systems all experienced continued growth through 2017 and 2018.

Hydrofluoro-olefin (HFO) refrigerants have begun to be employed in some stationary refrigeration and air conditioning equipment in Australia, but not in vehicles as was initially expected. Sales of vehicles employing HFOs were statistically irrelevant in 2018. In the stationary air conditioning sector, every major global chiller manufacturer now offers chiller models employing HFO-1234ze. Notably the HFO refrigerant of choice for large centrifugal chillers has become HFO-1233zd, which can provide meaningful financial benefits to equipment owners due to energy efficiency gains.

Leading supermarket chains continue active programs reducing leaks of high GWP (HFC) refrigerants and lead the way with concerted moves to HFC alternatives. The emergence of carbon dioxide (CO2) cascade and trans-critical systems in commercial refrigeration saw rapid growth of CO2 systems employed in the cold food chain, although from a low base. Innovation in the use of low-charge ammonia systems added to the highly energy efficient options for new build commercial refrigeration systems with a cooling capacity greater than 50 kWr.

The portion of total electricity consumed by RAC in 2018 was around 24% of all Australian electricity generated. Electricity price increases of more than 30% from 2016 to 2018 have placed significant emphasis on energy saving initiatives, particularly with large air conditioning systems in commercial buildings, and refrigeration equipment and plant in the supermarket and cold storage industries.

The report is available HERE