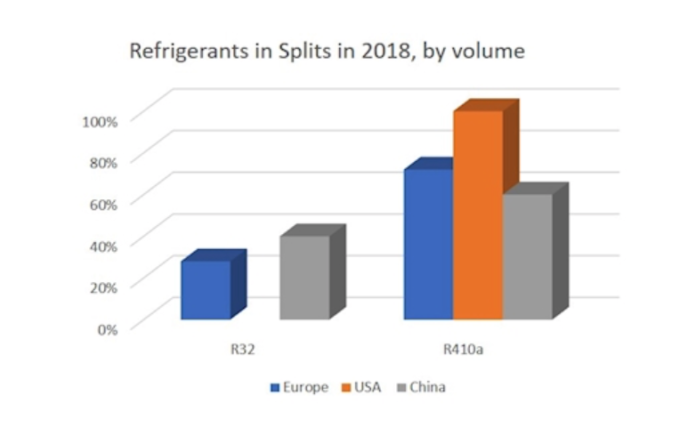 The European air conditioning (AC) and heat pump (HP) market (up to 50kW) continued to grow in 2019 with around 11.9 million units sold representing a market value of EUR 13.7bn. Rising global temperatures are expected to push up demand further in the future. Growing concerns over climate change are driving the market towards lower Global Warming Potential (GWP) and natural refrigerants.

Europe is leading the way in the adoption of GWP and natural refrigerants in these systems compared to the other regions in the world. Under the European F-gas Regulation, the amount of HFC (hydrofluorocarbon) placed annually on the EU market is capped. The HFC quota is then progressively reduced, hence the term ‘phase-down’. As part of this, the period 2018 – 2021 represents a critical phase in this progress. The F-gas Regulation requires a 79% cut in the use of HFCs between 2015 and 2030 in order to mitigate climate change. This has caused an unprecedented price rise in HFC refrigerants in the last couple of years.

BSRIA finds that in Europe R410A remains the main refrigerant used in most air conditioners. However, R32 is gaining ground rapidly and in 2019 approximately 37% of all splits systems used R32 refrigerants (volume in tonnes-factory charge). This share is expected to exceed 80% by 2023.

In the heat pump market, the picture is more mixed, as over 80% of heat pumps sold in 2019 contained R410A refrigerants with R134A being the second most common.   The other two refrigerants in use are R32 and R290 (propane) and, by 2023, their use is expected to increase – representing a move away from R410A.

Where chillers are concerned, new product lines are being brought to market, using the new refrigerants. For Scroll chillers, the shift is mainly from R410A to R32 and, to a lesser extent, to R290. For Screw chillers, the shift is mainly from using R134A to R1234ze, and, to a lesser extent R513A, especially for refits, where it is likely to be used for further 5-6 years.

Centrifugal chillers are expected to switch over from mainly using R134A to R1234ze and R1233zd.

There are many alternatives currently being tested by refrigerant producers and therefore BSRIA will be following the development and tracking the sales of air conditioning and heat pumps.

In contrast, in the US there is currently no federal legislation and no set timeline for HFC substitution. However, state regulation is accelerating HFC phase out as seen in California (and some north eastern states).

California is taking the lead by prohibiting HFCs from 2024 (though residential and light commercial applications are not included in this ban). There is no clear indication of the candidate refrigerant to replace R410A. In the chiller market, future trends indicate a progressive, part market and part regulation driven phase out of HFCs and replacement of R410A and R134A with blends of refrigerants with lower GWP.

In China, environmental policies and legislation have led to a drastic reduction in R22 units. With the rise of different types of refrigerants in recent years and the increasing demand for inverter AC, R410A has become the mainstream refrigerant in the industry and R32 is seen as likely to be the next refrigerant in the medium term. However, Chinese manufacturers are also looking at R290 refrigerant as potentially the main alternative in the long term.

In terms of chillers, China’s adoption of refrigerants is not very different to that seen in Europe, with new centrifugal chillers being launched with R1234ze and its numbers are growing.

In summary, smaller capacity systems are mostly moving towards R32 and some of them towards R290.  Due to the moderate flammability of R32, it is risky to use it in large volumes in buildings, and the GWP of this refrigerant is 675, although this is still significantly less than that of R410A. The industry suggests that in the medium term the average GWP needs to be around 400 in order to meet the objectives of the F-Gas regulation, whilst also satisfying the demand for refrigerant.

In small capacity scroll chillers, we will see a possible shift to R32 and R290 whereas in larger capacity chillers screw and centrifugal chillers we forecast a significant shift towards R1234ze and R1234zd.

Sustainability, but first of all science!