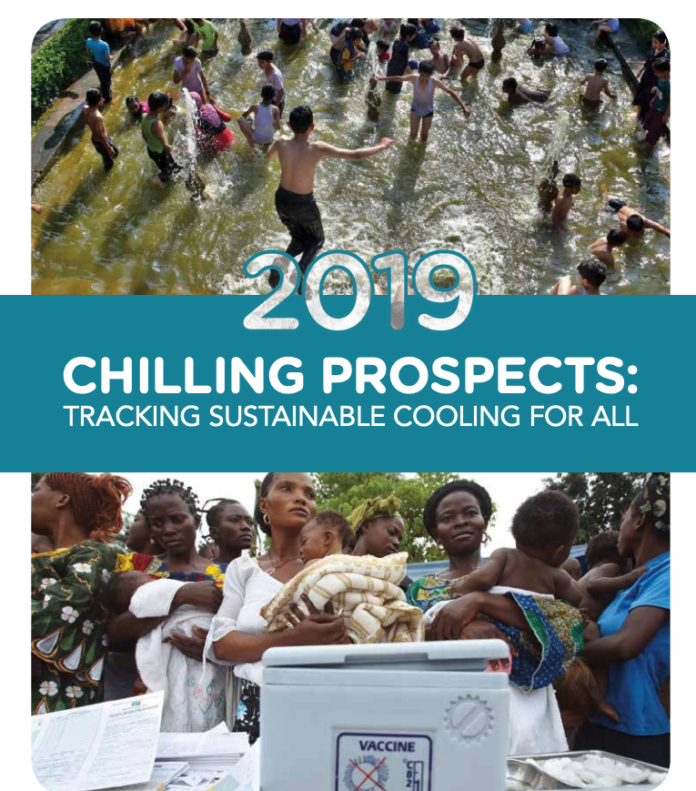 As temperatures hit record highs globally, significant populations are at increasing risk from lack of cooling access according to Sustainable Energy for All (SEforALL) research released yesterday, November 7th – threatening a spike in global energy demand and profound climate impacts.

Chilling Prospects: Providing Sustainable Cooling for All 2019 shines a light on the growing cooling access challenge. This year’s report finds that the public safety, health, safe medicine and food supply for 1.05 billion people in poor rural and urban areas are now at risk from lack of access to cooling. That includes adequate refrigeration, access to a reliable fan, air conditioning and other areas that are essential as the earth’s temperatures rise due to climate change.

«As the world rapidly urbanizes and temperatures only grow, we risk a significant increase in the number of people without access to sustainable cooling» said António Mexia, Chairman of the SEforALL Administrative Board and CEO of Energias de Portugal (EDP). «By 2030, the cost of productivity losses will be $2 trillion, and it will be the developing world that suffers the greatest “productivity penalty” as they deal with record temperatures and lack of cooling, stunting economic growth and further exacerbating global cooling inequity».

This year’s report, the second Chilling Prospects series, shows a notable growth in the numbers of ‘urban poor’ – those living in cities yet often lacking reliable access to electricity – at highest risk from a lack of cooling access: 680 million people living in urban slums have little or no cooling to protect them in a heatwave – a rise of 50 million people in the past year – with an additional 365 million people living in poor rural areas also at high risk. A further 2.2 billion in the lower middle class are only able to afford cheaper, less energy efficient air conditioners, potentially causing a spike in global energy demand and profound negative climate impacts.

Brian Dean, Head of Cooling and Energy Efficiency at Sustainable Energy for All, highlighted the need to see cooling access as a right: «In a warming world facing ongoing deadly impacts from climate change, we cannot view cooling as a luxury. In a heatwave, it can be a matter of life or death for children and older people. It ensures that workers are productive, that families can store nutritious food securely, and that infants can receive an effective vaccine in a rural clinic. Delivering sustainable cooling is an issue of equity that will enable millions to escape poverty and help to realize the Sustainable Development Goals». Launched during the Meeting of the Parties to the Montreal Protocol (MOP 31) in Rome, Italy, this year’s report takes stock of progress made over the past year, highlighting new solutions to sustainable access to cooling and calling on governments, industry, and development finance to urgently work together to reduce the number of people at risk from lack of access to cooling.

It also provides a new tool, The Cooling for All Needs Assessment, for governments, NGOs and development institutions to accurately size the market for cooling demands based on comfort, safety, nutrition and health needs.

Highlight findings from this year’s report include:

Chilling Prospects: Providing Sustainable Cooling for All 2019 sets out a series of action-oriented recommendations, complete with resources, to allow policymakers, development financiers, and industry to accelerate access to cooling. These include:

The report draws attention to the direct intersection between three internationally agreed goals: the Paris Climate Agreement; the Sustainable Development Goals; and the Montreal Protocol’s Kigali Amendment. One of the key goals of the Kigali Amendment is to limit consumption and production of hydrofluorocarbons (HFCs), a potent greenhouse gas used widely in air conditioners and refrigerators. The report was produced in partnership and supported by the Kigali Cooling Efficiency Program (K-CEP). The Chilling Prospects research is part of SEforALL’s Cooling for All initiative, which developed the report along with contributions from the Global Panel on Access to Cooling.

Here you can find the complete report.