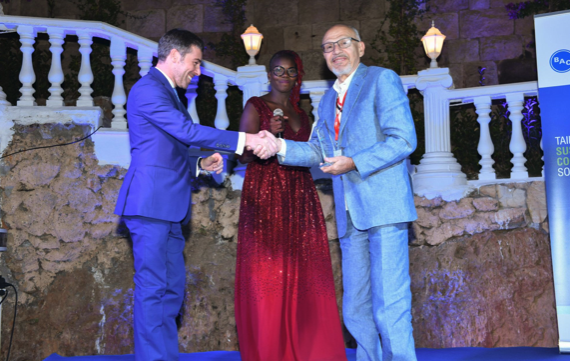 During the recent Eurovent Summit which took place in Antalya, Turkey, Pierluigi Schiesaro, the long-standing R&D Director of Arneg, was awarded the title of ‘Legend of Eurovent’.

Eurovent, the European Association for HVAC and cooling processes in the food industry, wanted to reward personalities who have distinguished themselves over the years for their invaluable service to the association.

This recognition comes at the peak of Mr Schiesaro‘s career, who proudly expressed his satisfaction with his achievements over the years and particularly thanked the team that had accompanied him on this adventure. Schiesaro has been Chairman of Eurovent’s RDC (refrigerated display cabinets) working group for 17 years, but his journey in the field of refrigeration regulations began much earlier, back in 1984 with Cecomaf, the European Committee of Refrigeration Equipment Manufacturers.

The Company hopes that the example of professionalism set by people like the R&D Director will be an inspiration to the next leaders in the industry, who are called upon to lead the future of refrigeration towards a path that is more and more focused on protecting the planet.