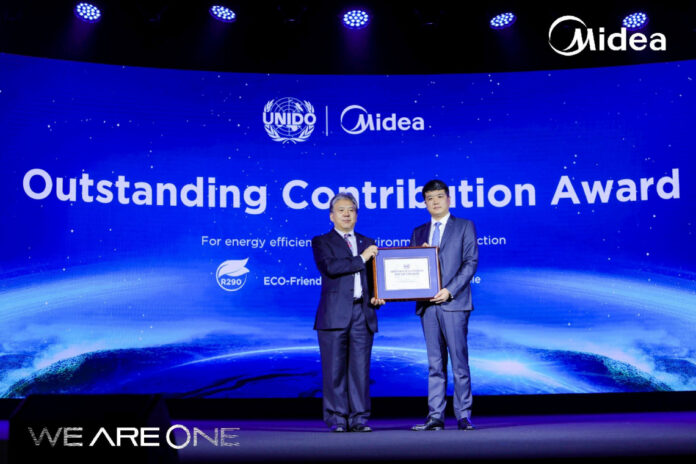 The Blue Angel certification, owned by the German Federal Ministry for the Environment and managed by the Federal Environmental Agency (UBA), is the oldest ecolabel in the world, established in 1978. It covers 120 product groups and about 12,000 products have received the label.

The stringent Blue Angel standard for split ACs was established in 2016. To qualify for a Blue Angel ecolabel, a split AC system must use refrigerants that are halogen-free (non-HFC), and have a global warming potential (GWP) below 10. Among other requirements, AC units must also be designed to be energy efficient, as well as easy to clean and service.

China is the global leader in the production of air-conditioning appliances, producing around 70% of the world’s room air conditioners. Midea, China’s largest exporter of air conditioners, has been working with the United Nations Industrial Development Organization (UNIDO) for over 10 years to transition away from using HCFC-22, an environmentally harmful refrigerant and, instead, manufacture products using propane (R-290), a natural substance.

In 2020, UNIDO presented Midea with an award for its outstanding contribution to environmental protection. The award certificate stated that UNIDO “would like to express its highest appreciation to Midea for its ongoing efforts to develop, manufacture and introduce to the market, residential air conditioners that meet the highest environmental standards.”

Portable R290 air conditioners made by Midea have been on sale in Europe for some time but the arrival of Midea’s All Easy Series R290 units is a game-changer. Split air conditioners, which are fixed in an external wall, are currently the most commonly used appliances for space cooling worldwide. The availability of Midea’s R290 split air conditioners is set to shake up the European market, driving a transition that will help reduce both energy consumption and greenhouse gas emissions on the continent.

The Cooling Emissions and Policy Synthesis Report, published by the UN Environment Programme and the International Energy Agency, showed that, globally, up to 460 billion tonnes of greenhouse gas emissions could be cut over the next four decades by making air conditioners twice as efficient as they are now. By 2050, it would be possible to save the amount of electricity produced by all the coal-fired power stations in China and India in 2018, saving up to $2.9 trillion.

This action would make a significant contribution towards getting on track to limiting the overall global temperature rise to 1.5 degrees Celsius, which is critical for minimizing the disastrous impacts of climate change. With global temperatures reaching record highs, providing cooling systems which are effective, sustainable and do not harm the environment is increasingly essential for everyday life.