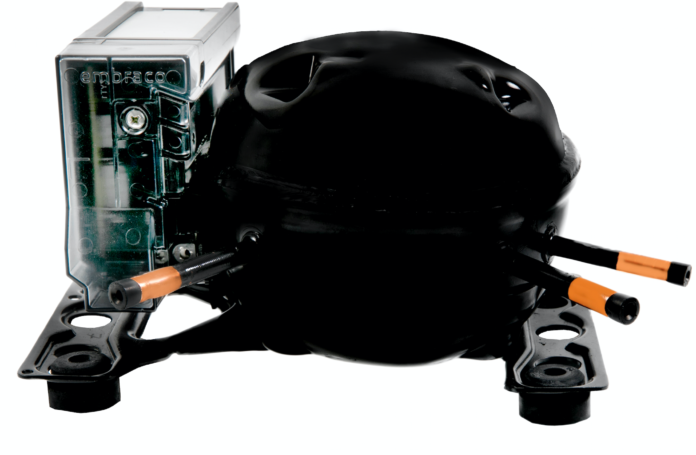 Embraco, a global provider of refrigeration technology for the residential and commercial cold chain, and part of Nidec Global Appliance’s brands portfolio, is putting in mass production along 2021 a pair of compressors for residential refrigeration that were designed to reshape the future in this segment. With a remarkable combination of innovation, energy efficiency, environmental sustainability and a unique correlation of cooling capacity and size, these launches just reinforce the brand reputation of Embraco, which has a track record of more than 1,500 valid patents at the moment.

The two new compressors are the ES and FMS, both of them at a very small size while still reaching a broad range of efficiency and cooling capacity, showing that the trend of miniaturization can also be combined with embedded technology.

The FMS, for example, which is the smallest one, is a variable speed compressor of just 123 millimeters high that reaches 265W of maximum capacity, a result normally delivered by bigger compressors. FMS also holds the special mission of making variable speed technology more accessible worldwide, taking along with it the advantages of energy savings, low noise, stability, reliability, and better food preservation. Both products work on natural refrigerant R600a, which has no ozone depletion potential and global warming potential close to zero, being a solution for the present and future. Such development efforts resulted in a total of 38 new patent applications so far.

“The ES and FMS represent a new stage in our product portfolio, achieving great results in our customers’ applications already using them in mass production. Both are state of the art products, made  to fulfill not only refrigerators manufacturers requirements, but also consumers needs, such as energy efficiency combined with high cooling capacity and future-proof refrigerants. Particularly FMS, brings new design possibilities to residential refrigeration due to its small size”, says Ricardo Bristotti, Home Appliances Vice-president at Nidec Global Appliance.

The FMS is a variable speed compressor (also known as inverter or VCC) with a wide range of applications in the residential refrigeration market, from small wine or beer coolers to large multi-door refrigerators. Such diversity of applications is possible because, although being a third smaller than its predecessor, the EM3, it has the cooling capacity of 265 W, the same as larger compressors, such as the VEG and VES, which is something unique in this size category, creating a potential environment for standardization.

Delivering 265 W of cooling capacity in such a small physical space required a series of improvements and innovations to make components smaller and lighter, yet highly resistant. The small size allows more free space inside the cabinet and Embraco already has customers planning new designs to take advantage of it.

The ES is a fixed speed compressor suitable for a wide range of applications, from water coolers to a large variety of residential refrigerators. It is 155 millimeters tall, which is 11% smaller than the EM3, allowing more internal space inside the cabinet with high quality and performance.

It is a global solution with the main goal of addressing market needs in the American continent. The ES runs on natural refrigerant R600a and aims to support the migration to natural refrigerants in this region. It reaches 166 W of cooling capacity, which is around 20% higher than market standard for this category of size, with 1.83 W/W of  energy efficiency.

Summed up, these attributes result in a competitive solution combined with a high level of embedded technology. From the refrigerator manufacturer perspective, the ES presents an additional benefit, which is allowing assembly flexibility, because of a suction port that adapts to the system’s layout.

Investment in Brazil and Mexico

Besides being the solutions that prepare the Embraco brand for the future in residential refrigeration, ES and FMS also mean investment in manufacturing lines and economic development for the cities where they are being produced, which is Joinville, in Brazil, and Apodaca, in Mexico.