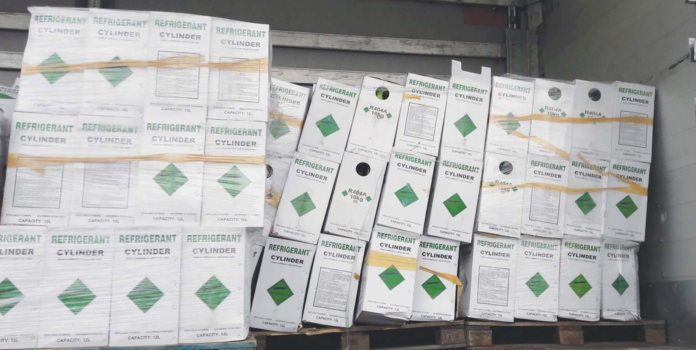 With the world heading for a temperature rise above 3°C this century, far beyond the universally recognised Paris Agreement target of 1.5°C, Europe’s ambitions to fight climate change are being torpedoed by a soaring trade in illegal hydrofluorocarbons (HFCs).

A new report released today by the London-based Environmental Investigation Agency (EIA) reveals the potential climate impact of this illegal trade could amount to the greenhouse gas emissions of more than 6.5 million cars being driven for a year.

The EU revised its F-Gas Regulation in 2014 to phase down HFCs, a family of synthetic greenhouse gases hundreds to thousands of times more potent than CO2 and commonly used in refrigeration, air-conditioning, fire protection, aerosols and foams.

But as supplies shrink and prices rise under the EU’s HFC quotas, criminal trade has proliferated to meet demand.

Clare Perry, EIA’s Climate Campaigns Leader, said: “It’s no exaggeration to say the future stability of human society sits on a knife-edge and time is running out to meaningfully tackle climate change. We can’t afford a single misstep in our efforts to keep the global temperature rise below 1.5°C and the sheer scale of illegal HFC trade into the EU should be ringing alarm bells throughout the bloc – this is the biggest eco-crime no-one’s heard of and that needs to change, fast.”

EIA investigations for Europe’s Most Chilling Crime identified Romania as a key entry point for illegal HFCs into EU markets, highlighting a network of intermediaries involved in illegal trade and commonplace use of bribery to smuggle HFCs across the border.

Evidence from successful enforcement efforts in other illegal trade hotspots, such as Poland and Lithuania, suggest illegal traders are opportunistic and move to exploit markets with weak enforcement.

EIA investigators went undercover in Romania to infiltrate the highly profitable trade and found no shortage of suppliers willing to break the law to supply them with smuggled HFCs, at times supplied in single-use cylinders which have been outlawed in the EU.

EIA identified a growing trend of illegal HFC-404A in circulation, a super-potent refrigerant that is banned from topping up large refrigeration systems. In 2020, this refrigerant accounted for more than one-third of all HFC seizures.

The most shocking revelation was the discovery that these hazardous gases were being smuggled around Europe below unwitting passengers and drivers in the luggage compartments of transcontinental coaches, among other methods.

Perry added: “The illegal trade flourishes because prosecutions and financial penalties are rare and are usually not commensurate with the profits to be made. In particular, corruption at Romanian border points needs to be addressed as a matter of urgency.”

Although the size of the illegal HFC trade cannot be accurately estimated, EIA believes it is significant, likely between 20-30 per cent of the legal trade – and with an allowable annual EU quota of 100.3 million tonnes CO2-equivalent (CO2e), this would indicate the volume of illegal HFCs entering the EU is potentially as much as 30 million tonnes of CO2e.

One indication of the illegal trade is the significant discrepancy between reported exports into the EU and the EU’s reported imports, which have been consistently lower; imports reported under the EU’s HFC Registry since 2017 show a difference of an estimated 9.1 million tonnes CO2e in 2019.

Turkey appears to have played a key role as a source country for illegal HFC imports in 2018 and 2019. Information from HFC seizures suggests that abuse of EU transit procedures is a key method for non-quota HFCs to enter and travel across Europe.

Further, European Environment Agency data shows the number of companies reporting bulk HFC imports almost doubled from 2018-19 (from 895 to 1,694), many of them with no apparent links to the F-gas business and strongly indicative of criminal opportunism.

Europe’s Most Chilling Crime includes a series of recommendations by EIA to comprehensively address illegal HFC trade under the EU’s F-Gas Regulation.