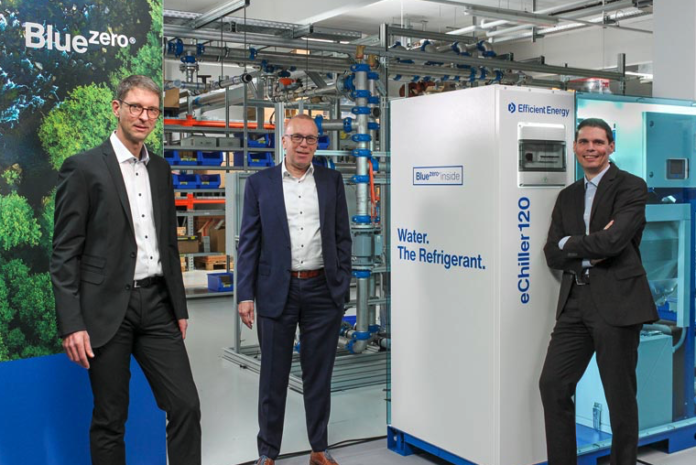 Efficient Energy GmbH, the maker of sustainable refrigeration technology based in Feldkirchen near Munich, is presenting the next generation of its eChiller chilled water units. The latest model – the eChilller120 – offers 120 kW cooling capacity with 0 percent direct CO2 emissions. With its Bluezero® technology that uses water as a refrigerant, the company is a pioneer in the field of clean cooling. By scaling its new products, Efficient Energy GmbH has now made clean cooling viable for applications requiring higher cooling capacities. 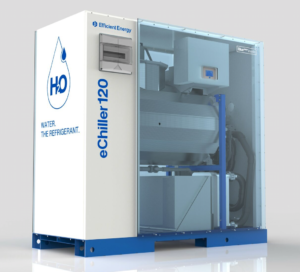 The eChiller120 is ideally suited for process cooling, machine cooling and technical air conditioning and can therefore be used in e.g. mechanical engineering, the automotive, rubber and plastics industries or for cooling data centres, control cabinets and server rooms.

The principle behind the refrigeration process of the new eChiller120 is identical to that of the smaller eChiller35/45. Before going into operation, it is filled once with softened tap water as a refrigerant, which is then used in a closed circuit for refrigeration.

New, however, are the entirely redesigned construction and an improved compressor concept. The turbo compressor, which was developed by Efficient Energy GmbH in house, has been enlarged and integrated directly into the braze plate heat exchanger module, thereby significantly increasing the efficiency of the refrigeration system. Despite its higher performance, the eChiller120 achieves a comparably low noise level, like its “kid brother” – the eChiller35/45.

A further innovation is the strategic introduction of various configuration options, including, e.g. an optional housing and free cooling module, a module for extending the part load and other possibilities for controlling system peripherals. The eChiller120 can be easily connected to an existing cooler and supports energy-optimised cooling control.

Combined with an adiabatic cooler, Efficient Energy GmbH’s clean cooling system qualifies for a high rate of BAFA funding (a German funding). For even greater cooling requirements, the eChiller120 can be configured in a cluster, with its modular, scalable design and an optionally integrated cluster control system making cooling capacities of over 500 kW achievable. Delivery of the eChiller120 will commence in summer 2021. The first advance orders have already been placed.

The development of a single-stage refrigeration system with greater refrigeration capacity was the next logical step for Efficient Energy GmbH. But this is only the starting shot for the diversification of the company’s product range. «The market potential for Bluezero® technology is far from exhausted and we’re already working on further developments. For 2020/2021, we again invested heavily in laboratory infrastructure and development to establish clean cooling on the market as quickly and broadly as possible» says Efficient Energy GmbH’s CEO and Managing Director, Georg Dietrich. At the same time, the company continues to expand its distribution network and intends to conclude further OEM partnerships. «This is the only way we can further exploit the market potential of Bluezero® and play an active role in the fight against climate change» Dietrich continues.

Refrigeration industry in a climate context:

* Use of small amounts in the eChiller with one-time filling of 60 to 100 litres of regular, softened tap water without additives in a closed circuit.