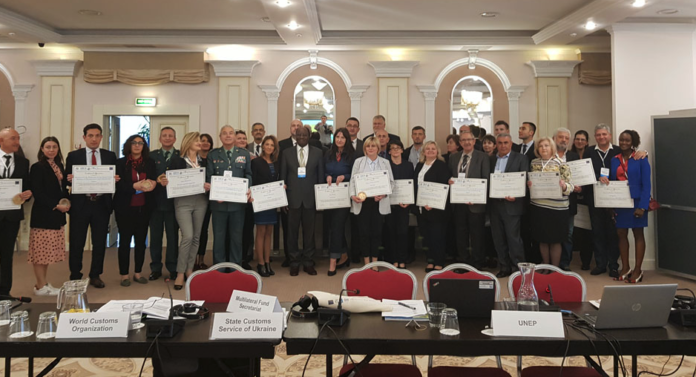 The objective of the meeting was to promote regional cooperation between Customs and enforcement officers and Montreal Protocol focal points and to acknowledge the important role played by Customs administrations and enforcement bodies in implementing the provisions laid down by the Montreal Protocol on Substances that Deplete the Ozone Layer, and by the Kigali Amendment thereto.

Under the Global Montreal Protocol Award for Customs and Enforcement Officers, about 180 medals and certificates were handed out to individuals and their respective organizations. The certificates were signed by Dr. Kunio Mikuriya, WCO Secretary General; Ms. Elizabeth Mrema, Director of UNEP’s Law Division; and Dr. Tina Birmpili, Executive Secretary of the Ozone Secretariat for the Vienna Convention and Montreal Protocol.

The Montreal Protocol, along with the Vienna Convention, was ratified by 198 Parties on 16 September 2009, thus making it the first universally ratified treaty in the history of the United Nations.

Chlorofluorocarbons (CFCs) and hydrochlorofluorocarbons (HCFCs) were traditionally used mainly in refrigerating and air conditioning systems and as foam blowing agents. More than 99% of these ozone-depleting and global warming substances have been phased out and the ozone layer is expected to recover in the second half of the century.

On 1 January 2019, the Kigali Amendment to the Montreal Protocol entered into force. Under the Kigali Amendment, Parties will reduce the use of hydrofluorocarbons (HFCs) by more than 80-85 % over the next 25 to 27 years. HFCs are not ozone-depleting substances; they do, however, contribute towards global warming as they are potent greenhouse gases (GHGs) with high global warming potential. If left uncontrolled, their emissions are projected to increase nearly twentyfold in the coming decades due mostly to increased demand for refrigeration and air conditioning, particularly in developing countries.

The WCO has already acted and, at its Council Sessions in June 2019, amendments to the Harmonized System (HS) Nomenclature (2022 version) were proposed by the HS Committee.  The proposed amendments include the creation of new subheadings for HFCs (under new heading 29.03) and for mixtures of HFCs (under new heading 38.27). According to the HS Convention, the amendments to the HS Nomenclature adopted will enter into force on 1 January 2022. Prior to the 2022 HS entering into force, Member administrations are recommended to insert the relevant new additional subheadings in their statistical nomenclature based on the WCO Recommendation on substances controlled by the Kigali amendment.

In addition, enforcement operations continue to be conducted on a regular basis. In fact, the WCO and China Customs have just conducted a global operation, DEMETER V (2019), targeting HFCs among other commodities, with significant seizures of these substances already being made.

The WCO wishes to reiterate its commitment to addressing climate change and to assisting its Member administrations in pursuing environmental sustainability.