In close cooperation with OLAF, the Italian Customs Agency seized 12.5 tonnes of fluorinated greenhouse gases, so called hydrofluorocarbons (HFCs) last week. The seizure follows OLAF’s pledge to make the fight against the illegal imports of HFCs into the EU one of its operational priorities, fully matching one of the key priorities of the new Commission: making Europe the first climate neutral continent by 2050, “the European Green Deal”.

The products seized have a high Global Warming Potential (GWP), estimated to be thousands of times more than their own mass, approximately 26 269 tonnes of CO2e, as per the CO2e calculation formula in Regulation (EU) No 517/2014 on fluorinated greenhouse gases (F-gases).

According to calculations by the Italian Customs Agency, this total amount of carbon 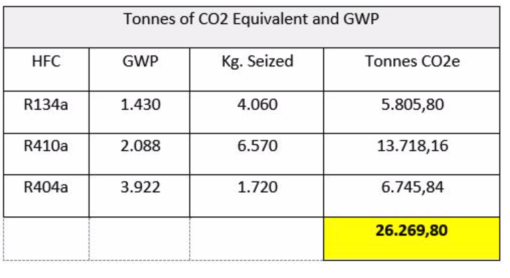 dioxide corresponds to CO2 emitted by more than 100 small cars (110 CO2 g/km), along a distance of almost 239 million kilometres.

HFC gases were introduced as replacements for ozone depleting substances, and are often used in refrigerated units. HFCs do not deplete the ozone layer but are potent greenhouse gases, often with a high global warming potential. The fight against the illegal import of HFCs into the EU is one of the operational priorities for OLAF, in line with the key priority of the Commission to make Europe the first climate neutral continent by 2050, “The European Green Deal”. To this end, OLAF organised a Conference on the fight against illegal imports of refrigerant gases into the EU in Brussels last month to gather information from industry and stakeholders in the area, and strengthen the exchange among customs authorities and the competent environmental authorities.